Teachers, coaches and mentors can often be quoted saying “practice makes perfect.”  Unfortunately, the thought of practicing a weakness makes people wince, especially when the practice is focused around one monotonous and similar task.  Blogging is different.  It gives people the opportunity to write differently every day.  The content, layout or even writing style can vary which can provide relief from drilling away a.

Our new intern, Thomson, helped us out at the November 8 screening event we recently held at the Canon Hollywood Professional Technology and Support Center. Here’s what he had to say about the rig we hooked him up to. The rig included a DVTec MultiRig, and a juiceLink riggy micro hooked to a mic. 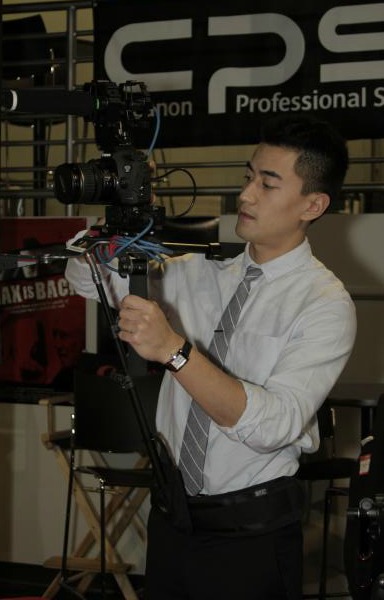 “Last Thursday I had the pleasure of handling our production team’s DVTec Multirig and, boy, was I impressed. The Association held their Boot Camp premiere at the Canon Hollywood Professional Technology and Support Center  and I had the responsibility of covering the event. I never handled a DVTec MultiRig before and was uneasy that I very well may capture three hours of useless footage.

“To my astonishment, the DVTec Multirig was easy to learn for any beginner and relieved my concerns. The MultiRig was compatible with most DSLR so propping on our Canon 5D Mark III was not a problem. I was even able to secure a juicedLink riggy micro and mic along with it. The juicedLink preamplifier offers quality recordings for anyone capturing sound with a DSLR. I could simply adjust the sound levels to limit distortions and it eliminated the hiss you would typically hear from the camera’s mic.

“Having one was essential for tonight if I needed to interview any of the participants. The rig came with an adjustable waistband for your convenience and a handy shock-absorbing stabilizer. This stabilizer equips to your waist making it painless for anyone holding the camera for prolonged hours. The combination of the three (shoulder rig, waistband, and stabilizer) produced smooth effortless footage. With a few simple lock and snaps I was ready to go in seconds!”

Here at the Canon Boot Camp, we’ve been “recovering” from our first annual Canon Boot Camp screening event which took place last week. It was so much fun! Thanks to Amy Kawadler of Canon USA, we were able to host a premiere at the posh Canon Hollywood Professional Technology and Support Center on Sunset Boulevard.

The night started with guests rolling in, despite the rain and traffic (thank you!), and feasting on scrumptious nibbles from Fabiolus. Amy then welcomed the crowd and explained that we wouldn’t have been there that night if it wasn’t for a little camera called the 5D Mark II. She introduced us to her wonderful staff, including Tim Smith, Mason Higa and Thomas Rose. Next, Fletcher Murray, President of The Association and Chief Instructor of The Canon Boot Camp, took the stage to kick off the screening of the 8 short films completely shot by Canon Boot Camp participants.

The short films included: The Nun Who Lied, The Sonnet, Just a Second, Escape, Hooker, Killer, Big Dave, and The Rose.

The event was also the World Premiere of The Rose, which is a short film shot in collaboration with creovision, a Czech production company who brought us to Prague to teach two 2-day workshops with 38 students. In 2 shoot days, I am amazed with what we accomplished. Being on location at the historic Prague train station and filming on an old train car made the experience even better. Markus Krug, who helped make the Prague Canon Boot Camp possible, was with us at the Premiere event, which was live streamed to the participants in Europe.

Now we’re motivated more than ever to keep producing thrilling, heartfelt, funny, and emotional short films at Canon Boot Camp workshops so that next year we can once again showcase the work of our amazing participants. Look out for the 2013 Canon Boot Camp dates, and join us, won’t you?

Thank you to Canon, our actors, sponsors, and everyone who helped make this possible! 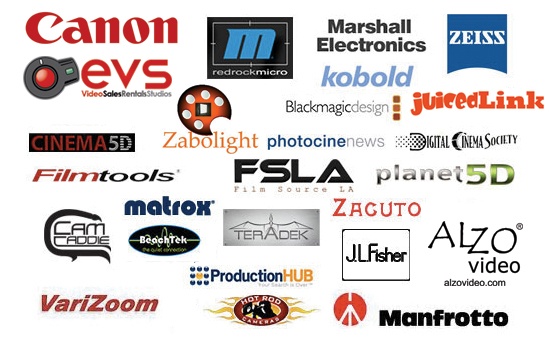 (This report comes in from Tom Myrdahl, who’s on assignment with the Boeing Company in Seattle. Tom Myrdahl, our 5D Guru and Canon Boot Camp crew member, had been communicating with Frank Buck, Manager of Boeing Seattle’s Creative Services and one of their top Producers Dean Jones. Tom’s been telling them about “the Look” of the 5D.   Coincidentally, a project of importance ended up on Dean’s plate that Dean felt it was the chance to try out the commercial look that the 5D could offer. So Tom was off to Seattle.  Here’s how the Canon HDSLR is doing at Boeing, which up til now has been an “all Nikon” company. Tom went up to Seattle to advise them on what and how much support equipment to get.) 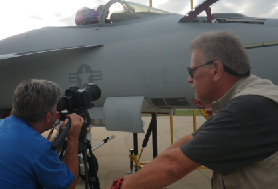 Frank Buck and Dean Jones were excited about the project as were two of Boeing’s best cameramen, Jim Lally and Tom Wallace. Within a few weeks the new 5D Mark III arrived.  The Compact Flash cards, HDMI cables, and other items arrived just in time for all of us to get on a plane and head off on a three week trip to St.Louis, Washington DC, and Huntington Beach California. All of us saw the quality of the 5D. The contrast and colors are more film-like.  Lighting like you would for film delivers a great look.

(above – Jim Lally and Tom Myrdahl on location)

(above – Dean Jones with the 5D in the Space Lab.)

All involved saw that this camera is not an ENG camera but must be treated as if shooting a commercial. The depth of field issues clearly demanded care and precision on focus …this demands precise camera movement and commercial style lighting techniques…which were more easily done with daylight balanced  LED Panel lights by Zabo, and HMI Jokers…all went well. 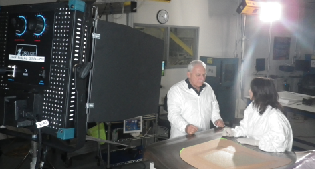 (above – the adjustable Kelvin temperature Zabolight on set at Boeing)

These last three weeks may indeed change the way Boeing Seattle shoot their hi-end videos from now on.

If you' ve been wondering