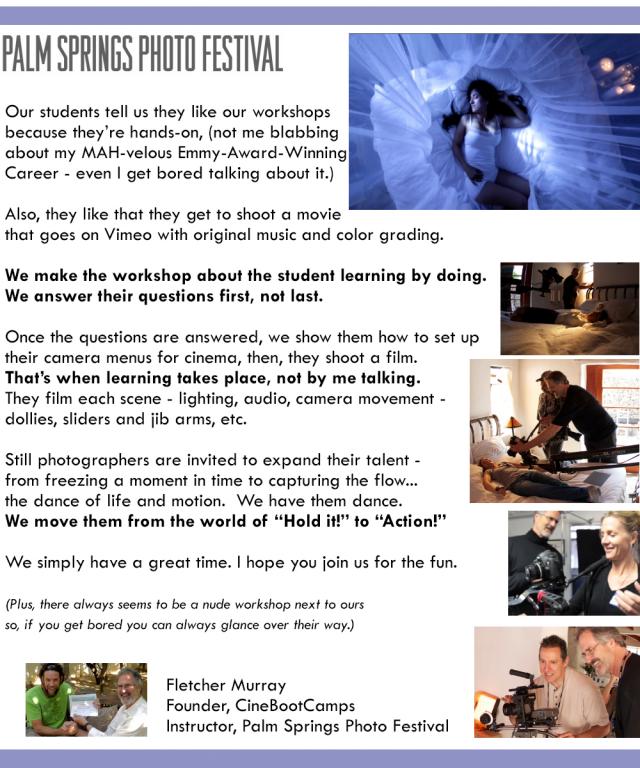 CLICK HERE TO REGISTER FOR THE PALM SPRINGS PHOTO FESTIVAL

Professional still photographers and filmmakers gather at the Palm Springs Photo Festival each year to enjoy the refreshing aesthetic recharge in balmy Palm Springs at the elegant Korakia Penzione.  We teach beginner and pro video workshops and simply must say that Jeff Dunas and his team organize top drawer workshops, seminars, portfolio reviews and see the work of world-class leaders in the field of aesthetic imagery.    I think I learn as much as my students each year.

After all these years we've got a clean slate.

In filmmaking they hold this slate (clapboard) up in front of the camera to identify the scene. They "clap" the board of the clapboard after identifying the scene.

For years we had dirty slates.  They never seemed to clean off the last scene's information. It was smudgy.


(Make sure to get video from Jeff Bauer)
Over the past few years, the Canon EOS 5D Mark II has been a run-away hit with independent filmmakers. It was one of the first DSLRs to offer 1080p High Definition video, allowing it to compete alongside more expensive, traditional camcorders.
Now, four years later, the new Canon EOS 5D Mark III has arrived and thankfully it hosts some upgrades to the video mode. With the more powerful DIGIC 5+ processor, moiré is reduced and the rolling shutter problems minimized. On the software side, encoding is more advanced, giving you options to record in a new, higher quality ‘All-i’ compression.
The 5D Mark III’s 35mm full frame sensor allows for shallow depth of field and relatively sharp picture quality. You also have full manual control over the way your video looks, controlling shutter speed, ISO, and more.
To determine the amount of noise present in each ISO setting, we created a series of tests on 5D Mark III’s sensitivity. For those of you who haven’t seen the results watch the video above.
1. First Impressions: After reviewing the footage for the first time, we had a near impossible time seeing any noise below 20000 ISO.
2. Results: Once we bumped up our levels and zoomed in 200%, we started to see that there is was at least some grain present in each ISO setting.
3. Conclusions: Native ISO numbers faired the best with 160, 320, 640, and 1250 showing the least amount of noise. Not that the other settings are bad, but I recommend avoiding them. ISO up to 6400 is usable but again stick with the native ISO numbers.
More Canon 5D Mark II ISO video tests are coming soon, this time showing the noise levels with the Noise Reduction feature turned on (Normal & High).
Stay tuned for more video previews here at CanonBootCamp.com

Whatever you want to say. I don't know enough to suggest what to write.

The first time I was first touched by a princess, like many young kids, was by one of Walt Disney’s animated features.

The second time I was touched by a princess was much later when we started filming for Princess Cruises, our company’s first client. I heard how the Brits pronounce the word, “prin-CESS”,  in the most regal way and I found myself wanting to bow slightly. It’s very human to yearn for moments where we rise above the humdrum life for a brief taste of the best of life – the life enjoyed by royalty.

The closest I came to royalty was filming the J. Paul Getty documentary. Mr. Getty, at that time the richest American private citizen, had chosen Sutton Place for his home.  Sutton Place is the Tudor mansion built in 1525 in Surrey by Sir Richard Weston, courtier to Henry VIII.

Nice digs. Obviously, Mr. Getty, our gracious host, had access to the finest things of life.  But Mr. Getty told us happiness had eluded him.  He told us he’d give all his wealth for one successful marriage. With that my definition of “the best” changed. “The best” of life is being in love and loving those in our lives.

In February of this year, I was touched a third time. This time by Princess Cruises, again. Princess is redefining “the best” cruise in a way that parallels Mr. Getty’s view of what really is “the best” in life.  Princess’ “come back new” campaign defines “the best” cruise as the one that brings the rich satisfaction of reconnecting with loved ones…exploring exotic places…connecting to rich historical textures…embracing cultures…in short, living life in love with our significant other, our families, and with the peoples and places Princess visits.

The “come back new” campaign is beautifully produced by Goodby Silverstein & Partners, Princess Cruises’ ad agency, capturing moments of reconnection on a Princess cruise. Ms. Jan Swartz, the new President of Princess Cruises, redefines cruising in the video below.

Steering the marketing launch is Mr. Gordon Ho, Senior Vice President of Marketing for Princess, formerly with Disney. His marketing course is based on survey data that a growing segment of cruise passengers want a transformative experience – “to enrich their lives, explore and visit new places, experience culture, and use vacations to reconnect with family.”

We applaud Princess for such a bold departure from their earlier branding, “escape completely”. The “come back new” campaign focuses not on escape but coming home to the core values that really matter to all of us in the family of man.

WIth this campaign Princess elevates its tier of caring service, already considered by most to be excellent.  My wife and I cruised on the Diamond Princess last  to Alaska. As always, the Princess crew took that extra step to make us feel well cared for.

With this new re-branding Princess returns to its core values that she had when we first started filming on the “Love Boat” as it was then known. More importantly, Princess expands her role to not only help one fall in love again with one’s significant other, but to fall in love with the world and the wonderful people and places Princess visits. 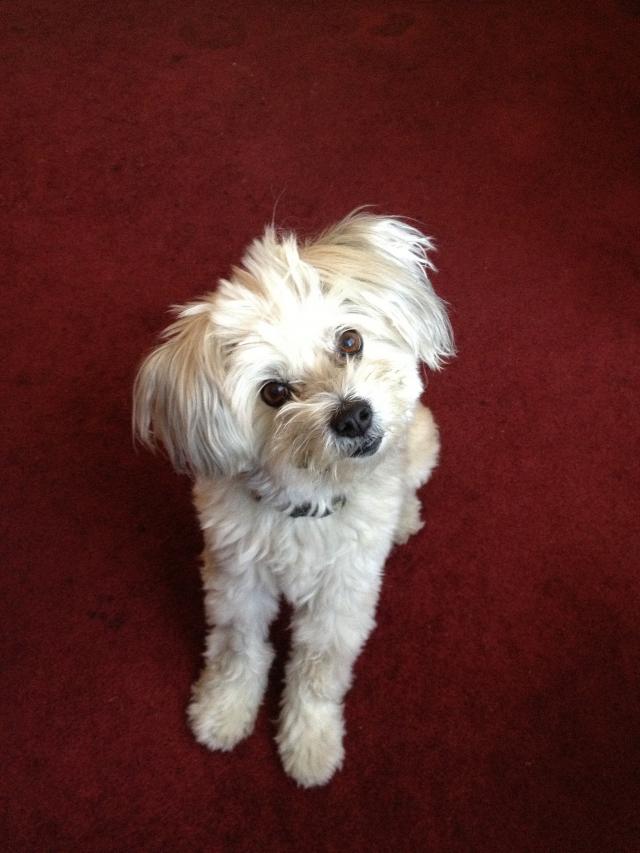 This blog was approved by Sadie Murray, Editor in Chief, on condition that “reconnecting with one’s dog” be added to the agenda of a “best life”.

There’s a huge difference between a video and a video that works.

A video that works actually helps the marketing and sales effort.  Many videos fall far short of helping.  Mos ha

A good video engages the viewer by showing pictures they find appealing. This can be a picture about something they like, and/or a picture shot in a way to be aesthetically pleasing.

The test of a good video is:  "Does it hold your interest if you turn the sound off?" If your video doesn’t, you’ve got some work to do.

From: trevor@theassociation.tv
This is almost a fully baked idea.

Have you ever wondered where ideas wait to be thought?

I mean, you sit there with your mind running.  It's like a phonograph needle
(except we don't have those anymore, so let¹s call it a laser beam on a CD
or a DVD) playing thoughts for you to think.  It never seems to run out,
this stream of thoughts.

So it's this uninterrupted stream of "Jan was nice to Herb. My cat looked
fat. Shoes don't match. Isn't Maui too expensive for Christmas…and rainy?
Must lose weight. Kevin was sweet.  What's on sale? These pens are empty.
Going to be eighty today. Was Martha Stewart really THAT guilty to go to
prison? That prick cut me off………………………"

A lot of thoughts are triggered by what we see. We call these ³outside²
thoughts. Other times we¹re deep in ³inside² thoughts.  We don't even see
what we see.  We're just "playing thoughts" completely disconnected from
"reality".

Well, I pose my question again.  Where is this stream of thoughts
warehoused?  There's never a gap between them. It's like some vast US Mail
warehouse with a conveyor belt of mail coming through – each one to be
inspected and "thought" instantly, one after another, and on and on until
eternity.  Some are logged to be sent back to the warehouse so they can be
thought again.  Others only get sent to the "thought once and only once" bin.

There never seems to be a let up, unless we're looking at the ocean and
hearing the roar of the breaking surf…inhaling and exhaling…like the
calming of our mother's breathing.  Or looking out over the Grand Canyon.

By the way, I don't have the answer to this question.  It is a complete
bafflement to me.  It's just like the other bafflement.  How can I remember
a thirty second moment on the coast of Kauai, and suddenly I can smell the
smells again, feel the sand between my toes and feel the salty air on my
skin and the warm breeze wafting my shirt? Or looking out across a fertile
prairie in Spring where the wheat is a soft green, so wispy they blur
together as the breeze undulates their feathery plumes.

I think we¹re just phonographs looking for something to play (or laser
pickup heads if you insist on being modern).  We play content from outside
sources, or our own oldies, or new stuff we¹ve whipped together.  We¹re just
walking jukeboxes (they don¹t make those anymore either).

And this is why I like going to the ocean. I just watch the swelling of the
waves, the pelicans, who are once the most awkward looking but efficiently
designed fish eating machines. But there¹s nothing to think about.  Even
when I¹m not thinking, I am thinking, ³Why aren¹t I thinking about
something?²

And thank goodness, this Aristotle session is sometimes interrupted by a
seagull that¹d like my sandwich while I ponder the meaning of life, which my
son, Thomas, told me when he was eight.

The meaning of life is something to do.

Alright then. Let¹s get thinking!  Maybe we should get some ice cream.

Maybe list some of the testimonials from surveys and a brief profile on one of the grads.