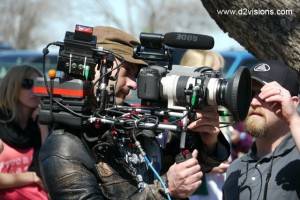 In the gold rush to Alaska, approximately 100,000 people rushed up to strike it rich between 1897 and 1899. Those who landed at Skagway encountered many merchants eager to sell them gear that they “must have” to insure their success.  Few bothered to tell the prospectors that the real gold fields were another 550 miles away. Or that it would probably take 30 trips, carrying 65-pound packs on their back to transport enough supplies to last a year, which is what the Canadian authorities demanded. Skagway was full of conmen who would set up a telegraph office to send messages back home.  The wires were strung out of town and stopped.

What does this have to do with camera rigs for the Canon DSLR?

Well, there are so many rigs invented and introduced that are perfect I think it’s Skagway all over again.

In our Canon Boot Camp we take the position that the shot should determine the mount you use. Not the other way around.

HAND-HELD SHOT - The shoulder mounted rig is just one option.  It’s good for the hand-held look. There are many beautifully-built rigs…Redrock and Zacuto lead the pack in strength and quality.  But only one rig really fills the bill if you have to hold the shot steady for longer than thirty seconds (that’s about how long a cameraperson can hold their breath.)  It’s the MultiRig by DvTec.  They have a rugged support pole descending from the main rig to a waistbelt which transfers the weight of the whole rig to your hips and your legs become your tripod legs so to speak. This liberates your hands.  You can drink a Guinness with your left hand and still shoot smoothly, which is why we call it the “Guinness Cam.”

I shot with it for 5 days at the Edinburgh Fringe Festival. We shot the street theater and other events in the venue. ALL hand-held. ALL day long. Starting 9 am. to 2 a.m.

SMOOTH, TV COMMERCIAL PRODUCTION SHOT – The professional dolly (Fisher or others) really shines here, when you’ve got a stable scene with pro actors who’ll hit their marks as you move the camera on the smooth dolly.  The downside is having to lay track. But on a stage the floor may be smooth enough.  Otherwise you can use 1 by 12 inch boards if the move is short.  But when we’re flying to a remote location and the budget’s tight we’ll just take a doorway dolly (using boards we buy at Home Depot for track) OR if the location is outside, we’ll rent a Chrysler Stow and Go. Your whole video production crew can ride to the shoot with the equipment.  Then, you offload, stow the seats and set up your camera platform (speed rail or 2 by 12 with a C clamp and tripod head.  This allows us to shoot out the side or the back tailgate. Let a little air out of the tires and it’s really pretty smooth.  We used it shooting on the airstrip for a pilot training video.

In a pinch you can use a wheelchair. We found this very effective on the cruise line shoots we did.  On land, almost any hotel has one you can borrow or rent for your shot.

LOW ANGLE (or tight quarters) – The CamCaddie rigs are great for these.  Designed and manufactured by Daniel McElderry, so he could shoot skateboard films, it’s a rugged compact rig at a great price.  The Alzo’s Transformer cage is tough, light and adaptable and low cost. 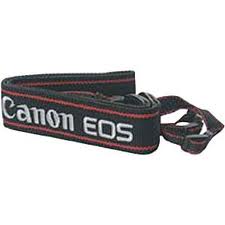 CHEAPEST & LIGHTEST  & SMALLEST – This rig wins the day.  It is for short moves and tight quarters. Maybe you’re the last person on earth to hear about it but it’s great.  It’s the Canon cloth neckstrap that comes free with the camera.  If you pull the strap tight around your neck and press outward, you’ll find you have a pretty steady shot. You can tilt up and pan.  It’s good for short shots.

I didn’t begin to use it extensively until I was in a small plane trying to shoot.  There was no room for a shoulder rig (I’m 6’7″) and it wouldn’t have worked anyway because planes (and cars) hit little bumps and the camera lifts on its own.  So I slung the strap under my thigh and pulled up.  Now I had 260 pounds of mass (my body) stabilizing the unexpected bumps from the plane.  The shot came out smooth and controlled.  On the subway loop the strap through the handgrips and pull down, then brace yourself against a vertical pole and you’re solid as a rock.   I sometimes substitute a nylon strap with multiple loops in it  (get it in a climbing shop) and carabiners running into heavy tie-wraps into the Canon DSLR body so I can quickly lengthen and shorten the attachment points.

STEADICAM – Of course, the Big Daddy is the Steadicam.  This rig is out of most Canon DSLR filmmaker’s reach. And it’s actually too light for the rig.  We have a policy of not commenting on rigs we haven’t tried.  However, if you promise not to tell anybody, we had an old Steadicam Jr. we rigged to the Canon 5D Mark II and it works pretty well.  It’s lighter than the Glidecam.  Balancing is really easy because it has knobs to move the tray.  You’ll probably want to get an arm brace to save your arm.   Steadicam does have newer rigs but again, if we haven’t tried it personally we don’t comment.

The Gold Rush to Alaska was over in two years.  The Gold Rush to use the Canon DSLR 7D, 5D Mark II and Mark III is still going strong.  New gear is always appearing and we’re always willing to take a look but we suggest to mock up the shot first and then pick the rig to get the shot.  Not the other way around. And if you’re not sure a rig will work, rent it and see. Then, invest in it.  Too many filmmakers feel they have to buy first and then try it out.  You can rent from EVS in Burbank.  All the salespeople are actually camera operators and they can give you the straight story.