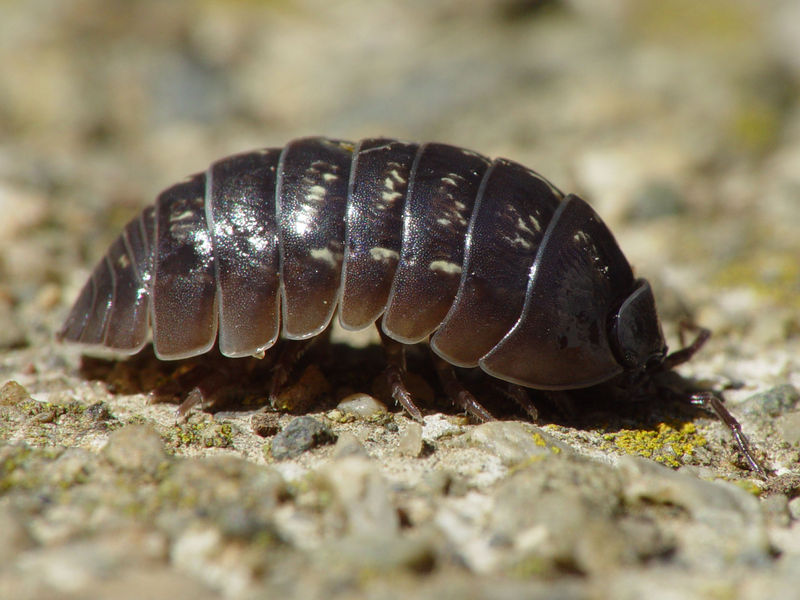 Often you don’t notice something is missing until it appears.

One of my favorite childhood items of interest was the roly poly. It probably has the best “PR” (Public Relations) of any insect and it is an instant favorite among kids, unlike spiders and red ants or ants in general. Certainly the cockroach is universally loathed, but the roly poly is held in such high esteem grown men and women will avoid stepping on this charming little bug. Actually it isn’t a bug. It isn’t an insect. It is a terrestrial crustacean, related to the shrimp.

If it were know by its scientific name, Armadillidium vulgare, it would be squashed in an instant.

And just so you know, vulgare, distinguishes itself from Armadillidium nasatum and Armadillidium depressum, the only other British species in the genus, by the gap that A. nasatum and A. depressum leave when rolling into a ball; A. vulgare does not leave such a gap.

But why are they climbing the walls at my house? Twelve maybe fourteen of them. Five more laying on their backs on my front stairs, which means I have to adroitly step over them as I do my morning exercise of stair climbing.

This means I have thirty minutes (I climb the stairs for thirty minutes each morning) to consider what could cause this sudden appearance of Arm-a-dill-IDUM vul-GAR-e. It must be breeding season. There’s nothing to eat on my steps or walls (or maybe there is if I had a microscope), but at least nothing visible.

They breathe through gill like structures which means they need moisture. So why climb the walls? AH! They must be collecting the morning dew. Bingo.

This puts to rest my filthy thoughts of roly polies getting drunk and rolling in the polly. In fact, I find out they reproduce by parthenogenesis. This method was used around the Parthenon in ancient Greece. No, seriously, Parthenos, in Greek means virgin. So these roly polies are all single parents. Their photo albums have no family pictures with Mum and Dud, and Granny and Gramps. Their family tree is a straight line with clumps of offspring. This explains why there is no Victoria Secret for roly polies. Why bother?

So as near as I can tell, they climb the wall by my staircase, suck up all the moisture they can drink, get high on oxygen, lose their balance and fall down, down, down to my stairs where they lie unconscious. Slowly they come to, still groggy from the great time they had. They wiggle their fourteen legs in the air for an hour or two…and then slowly turn over.

The trouble is that I exercise on the steps. I walk up and down for thirty minutes five times a week. I wear a size 16 shoe. That’s not good news if you’re a roly poly. But do they care? No. They lie there secure in the knowledge that they are cool because they are roly polys and it is politically incorrect to squash this purple little guy. And they’re right.

So if any of you have any data on this, please let me know.

Tiptoeing through the Polys