The Canon Boot Camp shoots a script during Pro Level II, one of which culminated in a romantic short film called, “The Sonnet.” I’ve seen it over and over, and it has emotional impact each time. Ever had a moment when reading a book transported your mind through the looking glass? Well, that’s what this film does:

Here’s the story of this excellent piece, as told by Fletcher Murray, Chief Instructor of the Canon Boot Camp as well as founding member and President of The Association:

“The Sonnet is a refreshing change from the helter skelter, quick cut style of many videos today. This quiet, short film explores the allure of fiction, specifically a sonnet by Pablo Neruda, to lift a person out of the humdrum and into fantasy. The storyline was a collaboration of The Association’s creative team, Nancy Read, Celine Duong and Fletcher Murray. 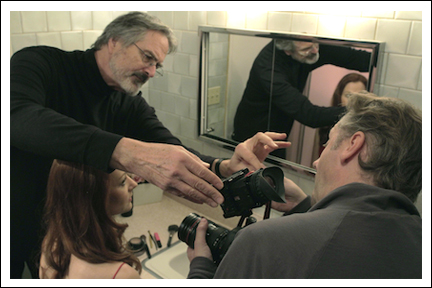 ego of Michele Caine. Michele plays the part of a bored woman on the subway, on her way home from work. Rachid Makhlouf plays the part of the fantasy lover. Carlos Reig-Plaza voices Neruda’s Sonnet LXXXI with passion and purpose which takes Michele away into a romantic fantasy.

“A lot of pro’s like to help filmmakers move up their career path so not only did we have stellar talent but our post production team donated hours off the clock to give the film its polish.

“Editing was done by Ken Mader’s Nightfall Studios, which did the color grading and mastering to realize director Fletcher Murray’s vision of a Cinema Verite piece. Bill Lae’s green screen composites are virtually imperceptible, once more proving the excellence of the Canon 5D Mark II.

“With the excellent production support and lighting of our gaffer – Tom Myrdahl, the grip work of Lawrence Ribeiro and Graham Murphy, and supplemental shots by Celine Duong and F. S. Fitzgerald, the film shows again the great work filmmakers can do with the Canon DSLR cameras, which make it easy to tell any story, anywhere.

“Scenes from the film were shot as a part of The Association’s two-day Canon Boot Camp.

“Our Canon Boot Camp is a real filmmaking workshop, not just a lot of talking. On Day One we make sure everybody knows their camera and the workflow. On Day Two we shoot a film so our graduates have something to put on their reel they can be proud of.”

“Another thing that’s different about our Canon Boot Camp is we use Active Learning. Endorsed by Columbia University, U.C. Berkeley and others, Active Learning is the most effective method of learning because it’s learning by doing. The filmmakers have to demonstrate their skills by shooting a real film, rather than listen to somebody drone on and on. I couldn’t be happier with their shots.”

For more info on the Canon Boot Camp, the longest running bootcamp in the world, go to canonbootcamp.com or call The Association at 818 841-9660.