One of the most often heard buzzwords describing the new Panasonic AF-100 camera is, “HDSLR Killer”.

Not necessarily, according to Panasonic’s Jan Crittenden Livingston, Product Mgr. for the AF-100. At a recent AF-100 event she stated that “there is still a market for the hugely popular and affordable HDSLR’s like the Canon 5D, especially at the current price point”.

However, I did notice she said it with a big smile on her face, and for good reason.

Utilizing the features that have made the HDSLR the hottest camera system for independent filmmakers as well as commercial productions and corporate video, Panasonic has taken it to the next level with the AF-100. “This is a video camera, not a still camera that happens to shoot video” adds Crittenden Livingston. 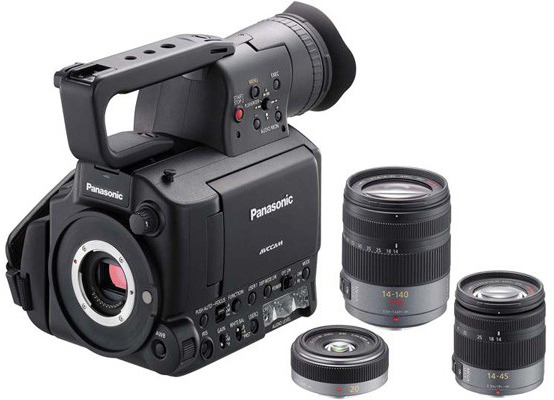 The 4/3″ sensor, which has a similar field of view as 35mm motion picture cameras, allows for that shallow depth of field and selective focus that film guys have always known and loved.

Many lens adapters will be available so that just about any lens can be mounted to the camera. Additionally, DP’s and shooters who’ve used other Panasonic cameras will recognize the layout and menu functions of the AF-100.

In my opinion, the AF-100 offers the best solution for film and video professionals who love the images that can be achieved with HDSLRs like the Canon 5D Mk II, but are accustomed to the features of video cameras.

HDSLR killer? I’ll just say that for professional film and video applications, HDSLR’s have one foot in the grave.