These two worlds couldn’t be further apart, but they collide in the most delightful way at the Palm Springs Photo Festival each Spring.  The part we play is trying to lure these fine artists of the frozen moment into the unpredictable, messy, out of control motion pictures.  The still photographer’s work captures the audience’s eye and holds it like a dancer’s frozen pose that is mesmerizing.  The cinematographer chases the tumbling of time, chasing it with shirt untucked, stumbling forward hoping to find focus.

So, what have I been smokin’?

The still photographer has a tripod with three knobs to hold the camera absolutely motionless. The motion picture photographer has a fluid head tripod, capable of panning and tilting during the shot.  Egads! You’re letting time do what it wants. You need to freeze that instant, not chase it.

And there’s more bliss.  My still photographer/filmmakers bring the beautiful fine art of lighting to the motion world. In motion pictures, because everything is moving, arranging lighting for subtle nuances is difficult. Still photographers bring a worship of high resolution, and texture, and “wrap” and all the fine elements of great still photography to the sloppy world of motion pictures.  I tell my filmmakers that they are the Rembrandts of imagery and cinematographers are like the drywall crew you hire to get it done in a day.

Yet the art of each world blends in a marvelous hybrid sauce that is surprisingly refreshing to all who attend.  We loosen still photographers up with the jib arm. 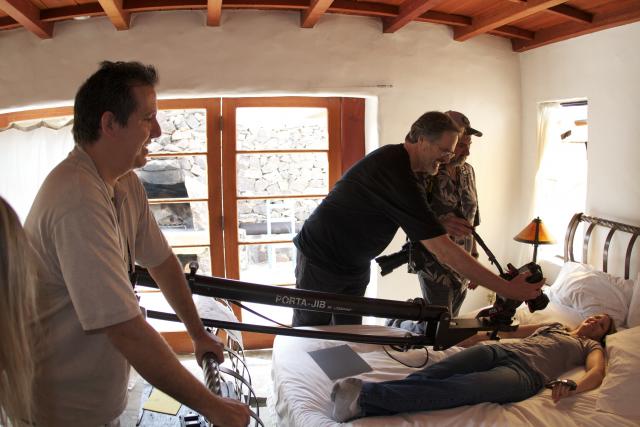 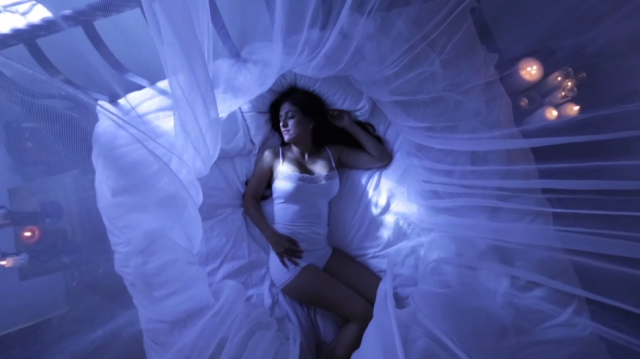 Then, with blue gels on the window, we create chilly illusions amidst the warm reality of Jeff Dunas’ Palm Springs Photo Festival – a day for night shot…. 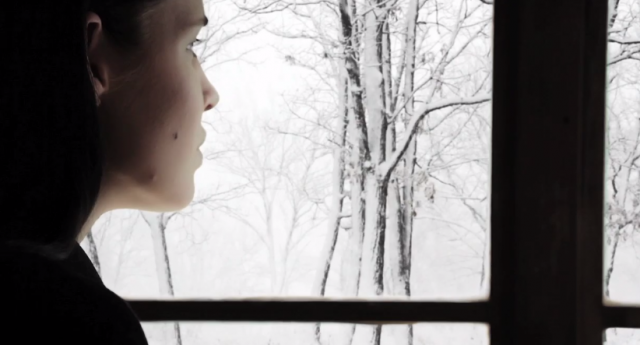 Or put up a green screen to fake that in a blizzard in Russia, even though it’s 102 outside. 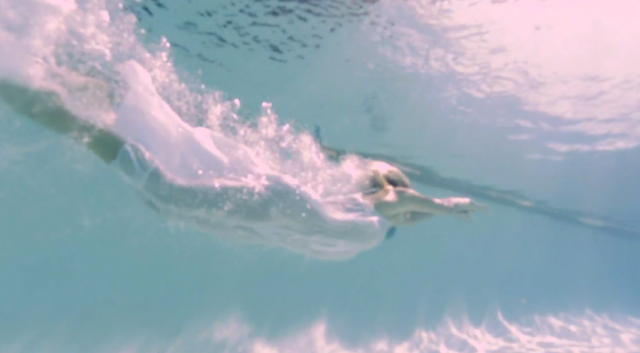 or take still camera housings into Korakia’s pools for this bubbly blue epiphany.

So for five days, we escort still photographers from the world of “holding it” into the world of sloppy motion and blurry images that smear into each other in a chase that recreates the livingness of life.  We get them moving around like that delightful scene in ‘Forrest Gump’ where he dances for Elvis. We get them into the world of motion…not freezing it, but riding it. We get their hips swaying. We get their shoulders down and relaxed. We loosen their grip on their camera. We let them exhale as they shoot.

It’s the most delightful party because we separate the boundaries of two distinct worlds and let them flow together.  It’s like we’re cooking up hybrid images that are like blending two cuisines to create a third….crepes with bits of kale, shredded lemon peel and cinammon sugar…or chocolate crusted with rock salt.  For the underwater shot we used a housing designed for still photographers, but usable for video on the Canon 5D Mk III because you can reassign the buttons on the camera.

The drills we do (to lift the still photographer into motion) move them out of their comfort zone (the world of isnesses) into the world of fluid motion. One drill asks them to take a still photograph and then storyboard out in the mind what happened just before that moment and what happened after that moment. Then, we have them take that storyboarded sequence and change it so it ends tragically, then have it end humorously.  Slowly they crack loose from the “plaster paris’ world of stillness to the roller coaster of sequence.

It is so charming to witness.  Imagine bringing together great chefs and asking them to blend something they’ve never tried before.  That’s what it’s like.  I hope you join Jeff and I for the fun.   And if you drift off to the “How to Light Nudes” class*, je comprends.