Where are you from and where the heck have you been for the last 25 years?

I’m a California boy, born in Pasadena. I went to film school at Loyola Marymount and specialized initially in documentary. I made several award-winning projects in my early period, then I went to work for the UN and did projects in Asia. When I came back I formed my own production company in Hawaii, where I worked on series shows and shot documentaries that were pertinent to Hawaii at that time.

After I came back to the United States, I lucked out and got a job with Lockheed, now Lockheed Martin, and started a career that really never stopped. I’ve been with Lockheed Martin for 25 years. I’ve shot projects with the [aircrafts] SR71, 117, F22, and the F35, shooting most of their commercials in the last couple of years and specializing in their product web videos. Everything I’ve been shooting with Lockheed has been with the Mark II 5D. We’ve gotten such good results that Lockheed Martin no longer shoots anything with their agency. We do everything for them, so it’s been a really great experience. We already have over thirty projects lined up for next year.

I’m a Director of Photography at The Association. I also help them put together camera packages and help them analyze creative shooting elements in a script they might have.

The favorite camera that I’ve been using right now has been the Mark II 5D, and I’m looking forward to this new C300 and other cameras that Canon will be bringing out.

Most exciting project you’ve ever done?

It’s hard to choose, really. I’ve had a good experience shooting Lockheed Martin’s aircraft carriers. I’ve had great experiences shooting the SR 71, which is the CIA aircraft that spied on Russia for 40 years. Airplanes have been a big part of my life. Also, when I was getting my M.A. at Loyola, I was very much involved in the Chicano movement in East LA and with one of the films I did, I ended up going to about eight riots. The last documentary I did for them was the Chicano Moratorium when Ruben Salizar was killed. It became sort of the pivotal event between Los Angeles and the Chicano community. I was honored to give them a twelve-minute documentary on that, which became sort of a historic piece for their movement.

What’s so great about the Canon Boot Camp?

It’s best because it teaches people the basics. They have checklists that the teachers go through with the students on how to set the camera up properly. You end up fully understanding the still camera and video settings so that you won’t end up making a mistake when you go out to shoot something.  What’s really great about this boot camp is that it not only teachers you how the camera works but it also teaches you about the pitfalls and mistakes you can make on the way. I use the 5D because it gives me the best picture, although it’s not very easy to work with. When you take this boot camp you’re going to walk away with the knowledge to use this camera properly.

For more information on The Association, our teachers, and our Canon Boot Camp, please visit our website or call 818.841.9660

10,000 baby boomers turn 65 every day. We at The Association made a TV commercial for Norman Taylor and Associates to make sure these elder Americans, your moms and dads and our moms and dads, receive proper health care and are not abused by unethical health care providers.

Too often it is easy to forget about our elders’ needs. The fact is we’ll all be old some day and we need to take action while we’re young so that abuse of elders becomes a thing of the past.

To make this point in the video we morphed from an old person to a young person restrained in her nursing home bed.  It is up to us to fight for the rights of those older Americans who fought to give us everything we needed to survive when we were defenseless babies.

If you’d like to receive the booklet “How to Recognize the Signs of Elder Abuse” call or email Norman Taylor and Associates, an experienced law firm dedicated to stopping elder abuse. Their contact info is below. 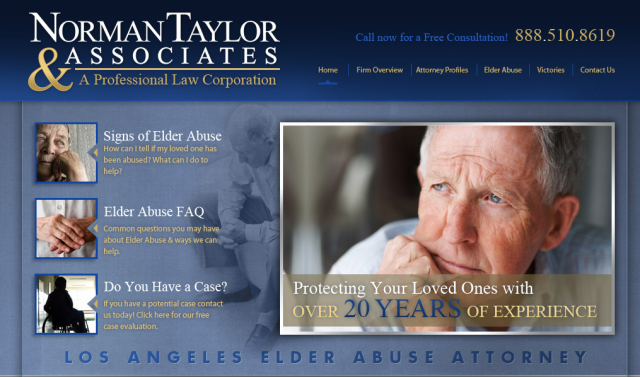 Join us to stop Elder Abuse.