No, we were not shooting a zombie thriller—that would have been too cliché (although we could have cranked up the shutter speed on our Canon cameras to make a really cool one). We were shooting the last scene of a twisted murder thriller written by our very own “office mom”, Nancy Murray. Sure, she passes out cookies around the office and tells us to take our vitamins, but behind that smile lies the lethal Black Widow.

Without ruining the plot, let’s just say that the past two boot camps have taken a dark turn, unlike our previous two fantastical videos, one of which is The Sonnet. Knives, guns, handcuffs, and a cemetery doesn’t sound like a typical Canon Boot Camp to me. To help ease the creepiness some might associate with cemeteries, we were lucky to find one of the most beautiful cemeteries in Los Angeles. We were the only bodies there on a Sunday afternoon. The groundskeeper, John, kept an eye on us although I promised him we’d behave ourselves. 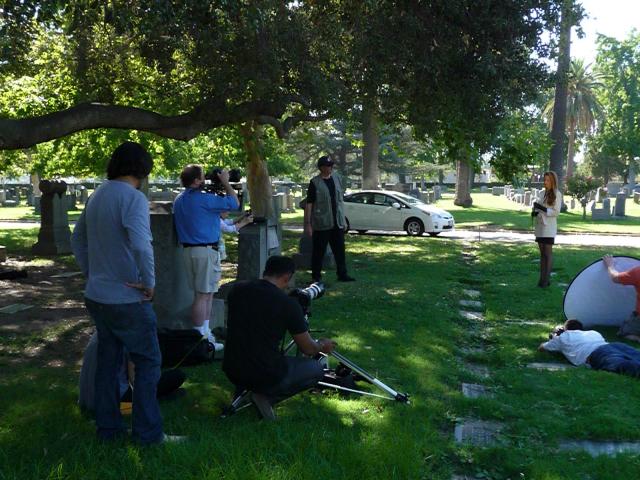 The most patient actress in the world, Anna Easteden, and our Canon Boot Camp students. 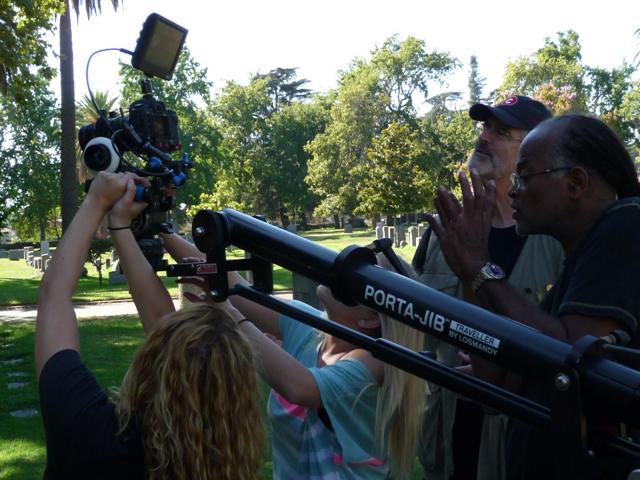 The ladies of the Canon Boot Camp setting up for a beautiful ending shot to our killer short.

Coincidentally, the Mountain View Cemetary is the same location used by Ron Howard as a location for a short film entitled, “When You Find Me” as part of the 2011 photo competition sponsored by Canon.

As you can see from the photos, it’s a hands-on activity and requires teamwork. We have plenty of equipment and students are able to really get involved in the shooting, the footage of which eventually becomes a short film. So far we have submitted one Canon Boot Camp short film (mentioned above – The Sonnet) with another short premiereing soon. Students are of course in the credits and may use the footage on their own reel.

We’re looking forward to the September Canon Boot Camp. Join us! If you can’t attend, then be sure to sign up on our newsletter to keep in touch for other dates.