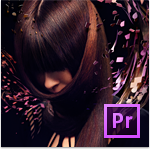 Just recently updated this year, the new Premiere Pro CS6 has benefited from an improved user interface, hardware acceleration boots, and new features.  There are a lot of things to like about this upgrade. It’s less cluttered, faster, and completely compatible with After Effects and Photoshop CS6. Shortcuts and controls have been overhauled to include FCP7 and Avid setups, and nice little tweaks to speed up your workflow.
There are some great additions to the software such as the new Warp Stabilize feature (which works great) and the ability to work natively in RAW formats from the Arri Alexa, Red Epic, and more.
However, the ease of use and performance has been and is still an issue with Premiere Pro, though much improved. Rendering and exporting is considerably slower than other editing systems despite the improvements made. It also tends to crash occasionally which can be quite annoying. The auto-save feature is great for this reason, but intrusive pop-ups can cause headaches when you’re in another window and every 10 minutes it launches Premiere Pro to the front just to say it was auto saved. There’s no way to turn it off either, so you just have to deal with it.
Overall, despite the occasional headaches and performance issues, this version of Premiere Pro is much improved with some excellent new features, customization and tools. Therefore, I highly recommend this program.
Need more information? Come to the Adobe Premiere Pro and FCPX Workshops with expert Larry Jordan on July 28th.
Apple Final Cut Pro X:

Last year, Apple released Final Cut Pro X, the new successor to its world renowned video editing platform. While the initial impressions were positive, once released, the editing world flipped out and denounced the new version as nothing more than an ‘i-Movie Pro.’

Good news, though! Apple addressed many of the issues editors were having, such as the lack of Multi-Cam editing and FCP7 file support. Since then, people have been slowly coming to terms with the drastic changes and even embracing them.
Final Cut Pro X is faster and more powerful, easier to use, taking the traditional approach to editing and turning it upside down. The user interface is clean and modern. Tools and important features are easy to access and the file management system is smart and intuitive.  One of the biggest features is the Magnetic Timeline and the ability to move tracks anywhere and the rest of the sequence will adjust to wherever you want without having to move other footage around first. Here’s a clip from YouTube of the Final Cut Pro X Sneak Peek on April 11, 2011 that includes a preview of the Magnetic Timeline at 9:15.
Also the auto analysis features for audio, stabilization and color are top notch. Combined with its ability to edit in native formats and background editing, FCPX is a very capable editing platform.
There are still issues to resolve however. Despite having a wide range of features and effects, the lack of third-party plug-ins for FCPX is disturbing. Also the complete lack of OMF support is outrageous for those of us that work with Audio engineers and they want to get their work to us in the highest quality. While these may not bother the average editor or filmmaker, to the pros this is almost a death sentence.
At the end of the day, Final Cut Pro X is an extremely polished, well thought out program that deserves our attention. It’s excellent performance, compatibility, and features, make this a serious option for filmmakers. So I also highly recommend this program.
Need more information? Come to the Adobe Premiere Pro and FCPX Workshops with expert Larry Jordan on July 28th.