What do JCI, Alpine, deCarta, Honda, Raytheon, Clarion and Hitachi have in common? The Associations’ voice recording services! 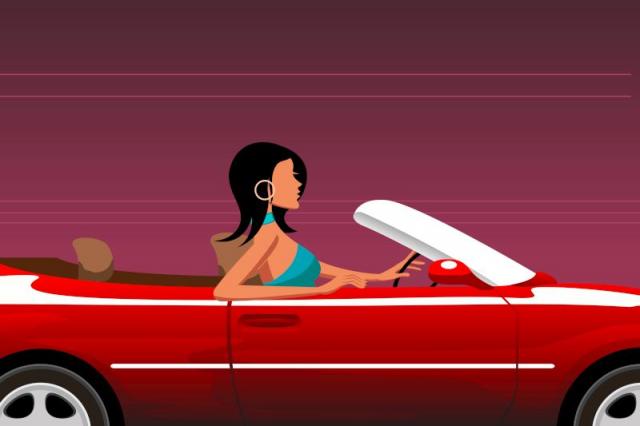 The Association is already famous in certain circles because of our prowess in digital filmmaking (and our Canon camera classes).  But we are also experts at voice recording, having made our mark in the automotive industry, especially in automotive telematics voice files, years ago. If you’ve ever heard a really pleasant GPS navigation voice (not computer generated – the real thing), it’s probably our voice files you’re listening to. We record voice files that match perfectly with voice files we recorded years ago. This makes the voice prompts smooth and seamless and pleasant to listen to, rather than a jerky, mismatched voice file.

Every year GPS Navigation systems have to be updated with the latest maps. So new voice files have to recorded, requiring the same voice talents to record the new files. Even though it’s the same voice talent recording the lines, the digital audio production company often doesn’t make sure the current performance matches perfectly with earlier voice files (so you can’t tell the files were recorded at different times).

The Association ensures new voice files match in pacing, attitude, pitch, inflection, modulation, interest, enthusiasm, and certainty. Most importantly the voice has to sound like the person reading the line really cares about the driver or the listener. It’s that human quality that computers just can’t match.

OUR DISTINGUISHING CHARACTERISTICS NO ONE ELSE DOES:

The extra steps we take are what made us the world leader in sound files for telematics applications.

Not only do we hire voice talent that are exclusively yours for years and years, we make sure all the scripts are ready and the language localized so none of your budget is Basic Steps to Error Free Voice File Recording wasted by confusions during the recording.

Our attention to Quality Control begins before you ever record. 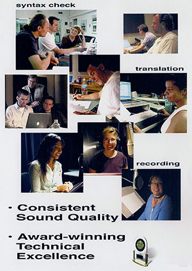 A full script review with the voice coach. We do a  syntax check and localize the files for Spanish, French Canadian and just about any other language you can name.  Being in the heart of Hollywood, there is an abundance of top quality voice coaches and voice talent in a wide variety of languages.

We make sure that translated files sound right.

We correct any script errors or bad translations before we get into the recording studio.

While in the recording studio we bring files already recorded by that voice talent which we play for them before they record so they can match themselves.

During recording we have a Quality Control person that makes sure every syllable is recorded as scripted.  That means no costly errors that have to be fixed later after bringing you much embarrassment, project delays and overruns. In twelve years of recording voice files, we have never missed a deadline. We have never gone over budget and never had to re-record incorrect files.

That’s because we have four levels of Quality Control, before, during recording, during editing and after editing before you get the final fileset.  So after the files are recorded, they are “cleaned” (the breaths and “mouth anomalies,” i.e. clicks and saliva noises are removed), edited and saved in the format you specify. We then listen to every file three times to make sure that everything is in order as scripted and labeled with the correct filename.

This avoids legal issues if a voice file triggered an incorrect driving maneuver for example, causing accident or injury or worse.

The Association has recorded tens of thousands of voice files for navigation and telematics applications since the beginning of car navigation systems.  We’ve recorded for JCI, Alpine, deCarta, Honda, Raytheon, Clarion and Hitachi.  We hope you’ll take this opportunity to get the service and quality that will make your career long and carefree. At least we’ll eliminate the needless hassles of voice recording.  Call us today.  We help computers understand human speech.